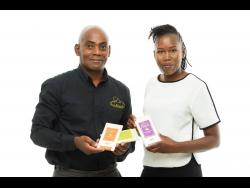 The story of one of Jamaica’s finest chocolatiers began, not with cocoa, which is the main ingredient in chocolate, but rather with coffee – a survey of fair trade coffee, to be exact.

In 2006, Hellen Akiror, originally from Uganda, was on a study trip to Jamaica from the UK to examine the properties of Jamaican Blue Mountain coffee and whether there was fair trade in market arrangements for coffee top of the world’s leading range.

At the time, she was a guest of her husband, architect Averell French, whose agronomist father had emigrated to the UK in the 1960s, leaving behind a substantial coffee and cocoa farm in the hills of Mount Pleasant, in the countryside of St Andrew. It is located on the western slope of the Blue Mountains overlooking the parish of St Mary. Access is via Golden Spring to St Andrew with a quick and steep climb along narrow roads passing through communities such as Mount James and Mount Airy.

Hellen was researching fair trade in agriculture for her Masters in Business Administration. The subject has occupied the minds of development economists and others lately as part of a search for solutions to reduce the gap between the price paid to farmers for primary products such as coffee and cocoa, and the profits made when their processed products are sold. to end users as consumer goods such as instant coffee and chocolate bars.

While Hellen focused on coffee, coming from a family of chocolatiers in Uganda, she also had more than a passing interest in Mount Pleasant cocoa beans.

With the closure of the Highgate Foods chocolate factory in the 1980s, there was an absence of premium Jamaican chocolates on the market, with lovers of the product having to get their chocolate fix from imported brands or the limited supply of a few artisanal producers.

“We made chocolates and gave the bars as a gift to our friend. The flavor was so good I wondered where the dark chocolate had gone in Jamaica all this time,” Hellen recalled.

To take the product from concept to market, a company, Coldbush Organics Limited, was launched in 2013, its flagship product line being the Mount Pleasant Farms Chocolatiers brand of chocolates. The range includes 70% dark chocolate bars, which come in several flavors, milk chocolate bars and truffles. They also produce cocoa butter and cocoa powder.

Since its inception, the company has won a number of awards, starting with the Jamaica Observer Food Award in 2013 for its Chocolate Peanut Spread. There was also the Sir Arthur Guinness Trust award in 2017. Mount Pleasant Farm was recently named among the world’s top food and drink producers, winning the 2022 Great Taste Awards gold star for its dark bars at 70%.

As a start-up, Coldbush Organics received $118,000 in funding from venture capital network First Angels in 2018. The network owns 35% of the company’s 604,000 issued shares, while the French retain 65% jointly. The company used the money to increase the area under cultivation from five acres to 20 acres. There are now 50 acres under cultivation with a projection to have a total of 100 acres of cocoa, coffee and coconut in three to five years. The Mount Pleasant farm employs between 15 and 24 people depending on production demand. Workers are also allowed to cultivate and harvest for their own use other crops, including oranges, yams and bananas.

Mount Pleasant grows its cocoa at altitudes between 3,000 and 5,000 feet above sea level. This, the owners say, provides the consistency of flavor needed to preserve the growing reputation of Mount Pleasant chocolate. For them, the concept of farm to bar is very important and therefore growing their own cocoa will always be a feature of the operations.

“We have contracts with cocoa farmers across the island, but that is made difficult by the fact that over time many have abandoned cocoa production,” Hellen said, adding that the certainty of the Supply is critical to Mount Pleasant’s operations.

“Over the past three years, we have focused on growing the commodities side of the business. We have also spent time acquiring much-needed equipment to increase production, which allows us to grow,” she added.

In what the entrepreneurs say is a constant effort to improve, they have, for example, made adjustments to the packaging to attract an international clientele. They also used the time provided by the COVID-19 pandemic to prepare the business for the eventual opening of the economy. Their chocolates are distributed through JRS distributors, to hotels on the north coast of Jamaica, to General Foods and Loshusan supermarkets in Kingston, and for export to Florida in the USA and London in the UK.

Production takes place at Wickie Wackie, near Bull Bay in St Andrew, after fermentation and drying on the farm.

“It’s a delicate process and we start fermentation within 24 hours of harvesting,” Averell said.