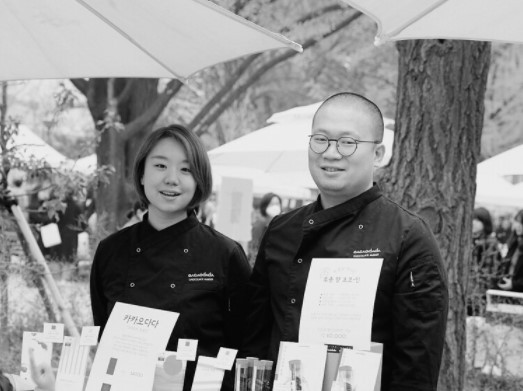 This is certainly true for Cacaodada, which since its inception in 2016 has been making not only chocolate bars from scratch but also brownies, cakes, drinking chocolate and more recently, chocolate jam.

Artisan chocolatier Go Yu-rim, who founded Cacaodada with Yoon, explained how, rather than turning to couverture chocolate, which is often used for chocolate work like making chocolate candies, Yoon is went straight to the cocoa bean.

After studying and researching how to make chocolate from bean to bar, Yoon and Go opened Cacaodada in Mapo-gu, Seoul, several years ago.

“We actually made our first chocolate from bean to bar in 2011,” Yoon, 34, said in an email interview, adding that it took them five more years to launch Cacaodada, which is exclusively dedicated to making chocolate from scratch.

The award-winning chocolate, their 70 percent single-origin chocolate from the Dominican Republic, features fruity richness, a hint of almond, and lovely depth.

There’s also the texture, very smooth and firm, gliding over the tongue and dissolving perfectly, a sign that Go and Yoon have taken the conching process, the penultimate step in chocolate making, very seriously.

Making chocolate from scratch is a long, arduous, multi-step process.

Before Go and Yoon even begin, the cocoa pods are harvested, the beans and pulp are removed from the pod, and fermented and dried.

Go and Yoon – who use cocoa from Madagascar, Tanzania, Ghana, Peru and the Dominican Republic – receive these beans, roast them and then remove the shells.

The resulting cocoa nibs, which are also sold at Cacaodada and can be enjoyed sprinkled over yogurt, are then ground into chocolate liqueur.

At this point, explaining the process that follows might get complicated, but Yoon, 39, provided a simplified explanation, saying, “Sugar is added to the chocolate liqueur, then the mixture is refined and conched for dark chocolate. “

Conching, which is essentially the process of heating and mixing chocolate, is crucial, according to Yoon, to achieve an ideal mouthfeel while ridding the chocolate of any unpleasant flavors or odors.

“Technically, each particle needs to be less than 50 microns in size, but if you make the particles too small or the particles are not uniform, the texture and physical properties can get worse,” Yoon said. “The key is to get the right particle size while bringing out the best chocolate flavor. ”

Yoon explained that the Cacaodada conching process takes between 24 hours and 72 hours.

“During the conching process, we don’t know when the chocolate will be finished, so there are times when we check the chocolate at dawn,” Go said.

Normally the last step would be to temper the chocolate and then pour it into bar molds. However, for Go and Yoon this will vary, for example depending on whether or not their toffee-like chocolate jam made from Tanzania cocoa beans is made or whether the cocoa beans are ground into a paste for their 1 ++ brownies. .

The jam, which Go and Yoon dubbed the Tanzania Mud Sweets, was released in March, following, according to Go, the chocolate spread launched last year.

“We wanted to make a sauce that had the fresh taste of chocolate and could be used in a variety of ways,” Yoon said.

“In addition, we felt that the fresh fruit flavors of the Tanzanian bean would serve as a suitable accent for a variety of foods,” Yoon added.

Yoon and Go were hesitant to reveal how the jam is made, only disclosing that nine-year-old sun-dried salt is used to make these jams.

“The salt enhances the flavors that might otherwise appear weaker in the mouth,” Yoon said.

The resulting jam has a very thick and gooey consistency and unfurls like toffee and caramel on the tongue before moving on to rich cocoa flavors with a scent of wine and a final note of red berries.

While the official site recommends different ways to use it, the jam actually tastes great right out of the spoonful of the jar, if you feel like it.

Chocolates, brownies, jams, drinking chocolate and cocoa nibs can be ordered online at the Cacaodada website.

A Sacher of Kindness – The New Indian Express