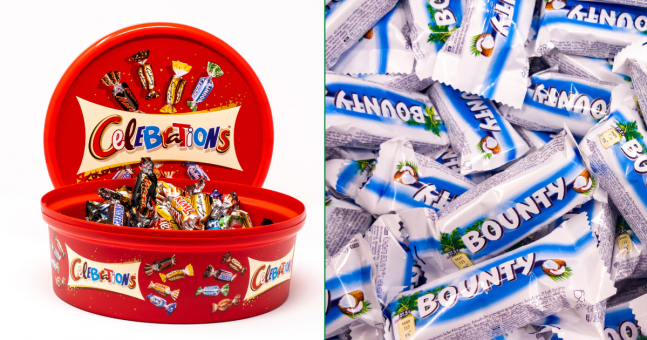 Bounty bars are set to be banned from Celebrations tubs this Christmas, which is likely to divide opinion.

The mini candy bar will be removed from some jars in a trial after research found 39% of consumers never touched the coconut candies.

Customers at select Tesco Christmas Market locations will be able to exchange bins bought in store that day for a new ‘No Bounty’ alternative until December 18.

The limited-edition jars will include extra Mars, Snickers, Milky Way, Galaxy, and Maltesers candies to make up for the missing Bounty bars.

Mars Wrigley said his own research of 2,000 Britons aged 18 to 65 suggested 18% would feel irritated to find only Bounty bars in the bath, while 58% thought it would lead to a family argument.

One in four consumers want the bars gone for good, and just over a fifth (22%) say they like Bounty the least of all the tub options.

Some 28% felt that coconut had no place in a chocolate bar at all.

The decision to remove the chocolate bar follows a Bounty return program last year, in which Bounty haters were able to return their unwanted chocolates and exchange them for Maltesers after the Christmas period.

The trial is taking place in 40 Tesco Christmas Market locations, but it has divided opinion.

Emily Owen, Senior Brand Manager of Celebrations, said: “You don’t know what you’ve got until it’s gone. And for those loyal – and secret – Bounty lovers, there’s still a chance let them come back after the trial.”

Here is a selection of what people have to say:

Why would you delete the Bounty when the disgusting and useless Milky Way exists? What self-respecting person resorts to eating the Milky Way? I feel personally attacked https://t.co/w8tsIsjWto

I find it hard to respect Bounty haters https://t.co/X3MeToxdWJ

This article originally appeared on Joe.co.uk.

KEEP READING: A family turns their pet golden retriever into a rug ‘to keep a part of him forever’