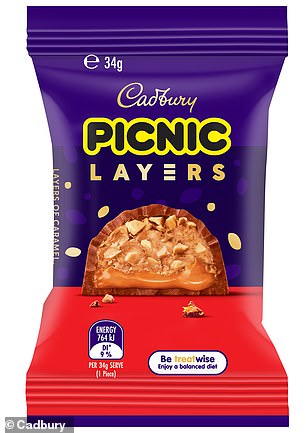 The decadently rich new chocolate bars are inspired by classic flavors customers know and love, but with a modern twist.

Both products contain three layers of indulgent chocolate encased in a domed chocolate shell for a unique sensory experience.

“We know how much Australians love Cadbury’s chocolate and we’re excited to introduce Cadbury’s Cherry Ripe and Picnic Layers, a new line of decadent chocolate bars inspired by the classic flavors we all love, taken to another level of indulgence.” , vice president of marketing for Cadbury ANZ, said Paul Chatfield.

In early December, a foodie believed he had stumbled upon Cadbury’s “dirty secret” in their popular line of Santa Claus chocolates.

In a TikTok video, the young man calls out to chocolatiers – pointing out a similarity in their Santa’s shape to Easter chocolate.

In the photo, on the left, the standard Easter bunny, on the right the undressed Santa Claus.

“Now is it just me or is it very clearly the Easter bunny mold with a picture of Santa Claus,” he asked in the video, while holding the chocolate.

“Cadbury, what are you doing?” He asked indignantly.

He then went through the company’s other Christmas chocolates, giving a thumbs up before buying one of the Santas to test his theory.

He brings Santa Claus home where he tears the packaging in front of the camera.

“This is very clearly an unmute rabbit,” he asserts – using a “confirmed” sticker.

The video has been viewed over 13,000 times but appears to divide TikTok users.

Some people thanked the young man for “exposing the truth”, while others did not understand why he was so mad.

“You have to get rid of the Easter chocolate somehow,” one woman said.

“They literally look like they have hair on them, definitely rabbits, I bought two,” laughed another.

A woman said she thought the same when the chocolates hit shelves in September.

Others said they weren’t sure if the mold looked like Santa Claus or the Easter Bunny and called it “terrifying” instead.